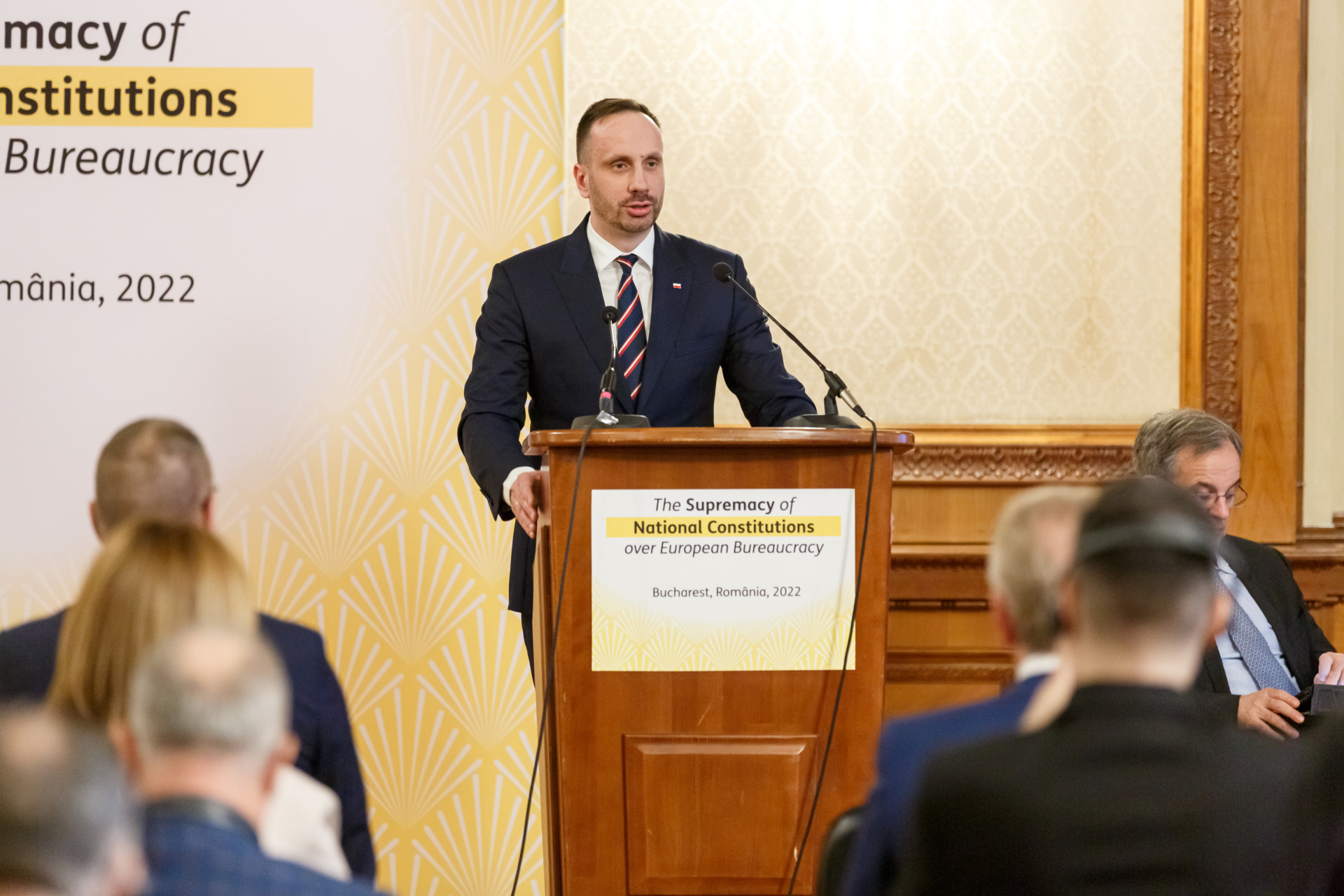 Speech I delivered in Bucharest on the 19th of February 2022:

It is a great honor to be able to speak in the company of such outstanding leaders of European conservative parties. We meet here in the face of growing doubts about the actions of European Union leaders towards the Member States.

At the moment, the European Union is at a turning point, plunging into a growing crisis. Eurocrats abandoned the noble ideals of the Founding Fathers of this Union, starting the road to progressive federalization and interference in the sovereignty of the member states. Eurocrats takes democracy from nations by undermining the basic mechanisms of the functioning of the sovereign nations that make up the European Union.

At present, the left-wing Eurocrats have come out against the Christian values ​​that underpin Schuman’s European community. They want to impose an agenda of LGBT groups on us, which is a clear contradiction to our Christian tradition.

EU Eurocrats use the words „tolerance” or „discrimination” so often, but themselves act as if they do not know what they mean. We say a firm „NO” to imposing on the states of Europe a left-wing agenda degenerating the social space of our nations. We will not allow Eurocrats to reach for our children and attack the foundations of our civilization with impunity.

Poland is a proud and sovereign state based on over a thousand years of Christian tradition. We will not allow our sacred values ​​to be taken from us in the name of falsely understood progress and modernity. These are ideals based on Christianity but also on the rule of law.

At this point, it is necessary to mention the compromising judgment of the Court of Justice of the European Union, which is disgracefully aimed at withdrawing Polish funds under the National Reconstruction Plan. Our deepest legal doubts are raised by the very mechanism of conditionality, the authorship of which is attributed to the leading EU institutions. Today, we should loudly oppose such shameful methods of blackmailing Member States, which have guaranteed their financial credibility for the implementation of the European Union Reconstruction Fund.

The European Union, largely governed by the Federal Republic of Germany, is today in opposition to the interests of its member states. Above our heads, the implementation of the green deal known as „Fit for 55” and the finalization of the Nord Stream 2 project are underway. All these solutions have far-reaching consequences, the catastrophic result of which will be the destruction of the coal industry, economic crisis and increasing dependence on Russian gas. We cannot allow a group of EU Eurocrats to trade with the human fate and the energy sovereignty of the countries of the European Community.

Concluding my speech, I would like to express my great gratitude to my friend George Simion, who, during his stay in Warsaw, gave me a map of Romania. I am a great supporter of building a geopolitical front against our common enemy, Vladimir Putin. At a time when Russian troops are standing on the border of Ukraine, we must make it clear that Russia is the greatest threat to the independence of the countries of Central and Eastern Europe. I believe that by standing united against our enemy, we are able to build a lasting coalition of our countries and armies in the service of the defense of peace.

My friend George! I wish you to win the upcoming elections and start building as a Romanian prime minister a strong, sovereign state – Romania Mare. Together, we can stand firmly on the battlefield for values. Let’s fight together against eurocrats for freedom in our Europe!